Parrots love wing beans (popularly known as Dambala in Sri Lanka). I had several wing bean wines on my ‘horizontally challenged garden‘ but they all died due to the combined effects of a papaya mealy bugs infestation and the dry spell we had about two months ago. Since then the Parrots stopped visiting but two surviving Nil Katarolu (Conchflower ? ) plants attract sunbirds

BTW: what kind of Parrot is this? I think it’s a Rose Ringed Parakeet. With the number of trees that have been cut down in the neighbourhood in recent weeks, it’s a miracle that this dead tree was left standing. It made a perfect perch for this Brahmini Kite. If you happen to pass the Kelanitissa Thermal power station, don’t forget to look towards the sky, you will see at least a dozen of them soaring a long way up. The thermal currents produced by the steam turbines coupled with the proximity of the garbage mountain makes it one of their favorite areas.

This one though was seen in Battaramulla, I don’t know if they range that far but then again Kelanitissa is not so far off as the crow (or the kite) flies. 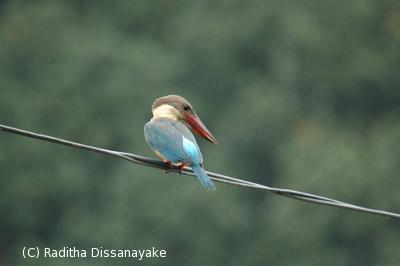 I always get confused with Kingfishers mostly because the ‘Common Kingfisher’ isn’t all that common at all in Sri Lanka, in fact it’s a bit rare. So it’s pretty easy to go downhill from there.

This one here is a Stork Billed Kingfisher (as far as I know). The photo I posted some months ago is of a White Throated Kingfisher (or at least that’s what I think) A Red Wattled Lapwing at the Hiyare Conservation Center.

The spotted dove is taking a close look at my solar panels. I think this maybe of the hatchlings that came our of the nest in the roof. It has great plans for my solar power system.

The PV panels were supplied by Nawaloka Trading along with the apparatus on which it is mounted. It’s designed so that it can be rotated to track the sun. But right now it’s manual. A computerized tracking system with sophisticated mounts would cost a fortune – far more than the panels themselves which is expensive enough as it is. The mounts were fabricated in their workshop to keep the cost down.