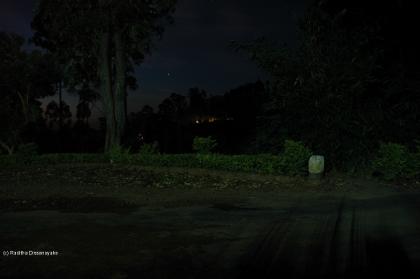 The old Colombo - Nuwara Eliya highway, passes through Dessford. Though many people now prefer to use the 'Radella shortcut', this is the less stressful drive. 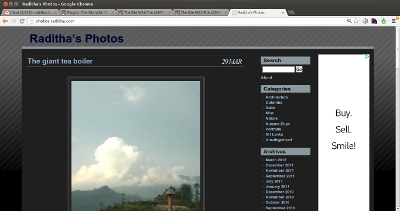 Had I waited two weeks longer before writing this post, it would have been an year since a new post was last added here. Part of the reason for that is being fed up with wordpress - the platform that used to power this blog. Now wordpress has given way to Jekyll and a new look has been created with Twitter Bootstrap. Google adsense which which hasn't sent me a check for months and months has also been shown the door. See how they are showing an add that no one is ever going to click on even in this screen capture. Wonder why I ever bothered with the damned thing in the first place. A giant tea boiler which can be seen from the drive from Hatton to Nuwara Eliya at Devon. Tea boilers like this but much smaller, small enough to fit on a table were found on small road side ‘petti kade’. These were very small cafes (if you could call it that) which served tea and buns. A picture of the modern variant has been posted earlier. Hope to share a photo of the real thing soon.

Pictured in the background is the Watagoda (Originally spelled as Wattegoda by british planters (වටගොඩ in sinhala) rock.

Krunegala is an ancient city surrounded by rocky outcrops. That makes the place hot, very hot. Fortunately there is a lake built by ancient kings right in the middle of the city. I do believe the proper name for the lake is Ranthaliya Wewa (රන්තලිය වැව ) named so because of a legend concerning a golden platter that is said to have been lost in the middle of the lake. But everyone calls it the Kurunegala Lake. The current dry weather is causing the lake to dry up (this photo was snapped in December 2011, it must be nearly all gone by now) A black ceiling fan spinning rather lazily against the backdrop of the white roof of the Heritage, Dambulla appears to be transparent when in fact it’s made of solid metal. The photo isn’t monochromatic either, it’s another illusion created by every object in the frame being either black or white.